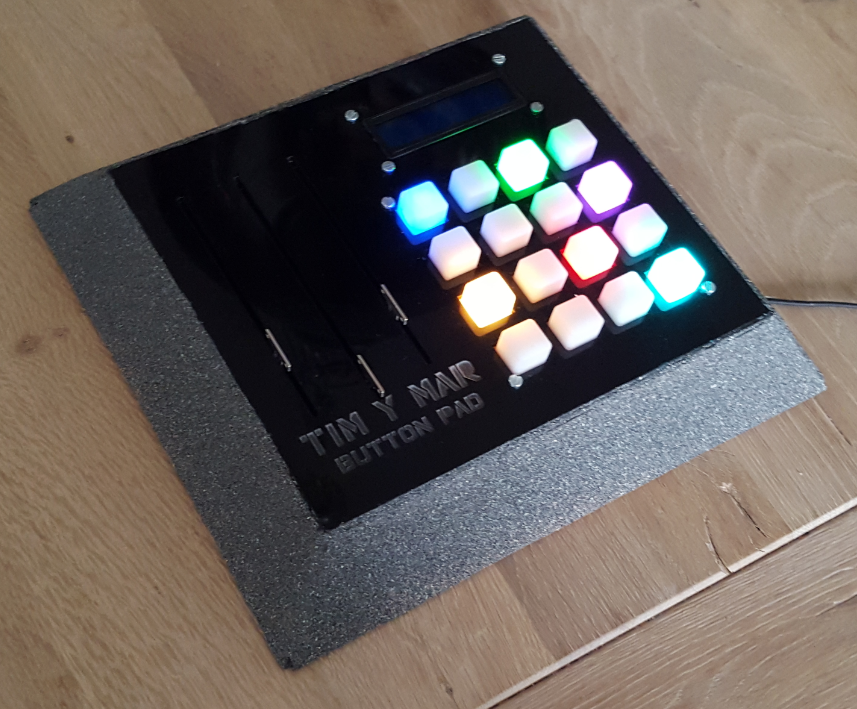 The wifi button controller project is a button pad / slider controller for some of the lights around my house.
Every button (in a 4 by 4 grid) represents a light source around the house that can be controlled via my Vera3. Upon a button press, the 100mm linear motorized sliders will then automatically go to the current RGB values for that light source. Upon a change in the slider, the ESP8266 is instructed to send the new values to the Vera3. All the code can be found on my github page: https://github.com/timdows/AMD/tree/master/WifiBottonController

The Fader is created three times (Red, Green and Blue). The fader is updated via a state-machine concept every loop cycle.
It can be forced to set an analog value that via a lookup table is set to a percentage between 0 and 100.
Every loop cycle it checkes if the motor values should be updated.

The L293D controles the motors, it is controlled by the Fader class. Every fader has its dedicated motor.
It also uses a state-machine concept to monitor the running time.

The SoftButton class represents the physical button itself, therefor it is created 16 times.
It checks if a color should be set to the representing WS2801 led below it or that the new values from the slider have to be send to the Vera3, this is done by writing on the serial line of the Arduino where the ESP8266 is listening on.

The wifi_button_controller itself initializes all the components and steps through the 4 by 4 grid in order to detect a button press. Upon a button press the faders are set to the corresponding last known position.

The ESP8266 init.lua sets up the wifi connection and only has the setLed function. This function is called when a setLed command is written on the serial line between the Arduino and the ESP8266.